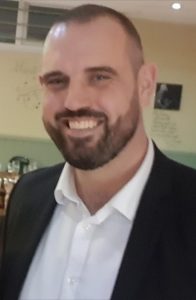 Matt has been in the industry from an apprentice through to today. He started by working on the tools when he left school then progressed onto management and finally onto becoming director and owner of the company.

His vision was to succeed in business and to create a company that has hard work ethic but also a fun place to work, with a team moral being key.

Matt’s main assets are his attention to detail, tenacity, empathy & leadership, these have allowed him to create good positive relations with customers.

His willingness to go the extra mile to ensure that a job is completed on time, every time. One of his motto’s is “there is no I in team”.

He may come across as relentless at times by double and triple checking everything from measurements to emails to minimize mistakes to ensure perfection is accomplished, he believes this is key to why MR Industrial Services has such a good name in the industry and consistently deliver. His competitive nature in sport has followed him into business.

Since being in the industry, Matt’s dream has became a reality by running his own company. He has overcame many challenges, from a young age, losing his mum at the age of 12 after being so close, he could have chosen the wrong path to go down, but instead he used it as way of trying to succeed in life, he didn’t attend a great school and having dyslexia meant he struggled academically, although he still struggles daily, he doesn’t let it hold him back and has found ways to adapt and overcome. He has an impressive natural ability at reading and breaking down drawings and absorbing information which has helped him learn in business (the saying – like a sponge), as well as impressive organisation skills. He is very proud and excited to see how the business is progressing, and how quick it has already grown into a very well respected and large company, nationwide. He passionately believes he has the best secondary steel company in the UK and is excited to see how far the company can go.

Matt served as an apprentice panel beater, working continental shifts 4 on 4 off, during his 4 days off he worked as a welder and pipe fitter with a close friend’s fathers’ business, this is where he progressed his welding, fabricating, reading drawings and fitting skills. He then moved onto have a short spell in the roofing trade. Matt then became a sub-contractor working in the secondary steel industry and moved up to becoming a manager and gangman, managing some of the biggest and most prestigious projects in the country. After gaining experience and successfully managing, Matt, with his ambition and drive to continue to succeed and better himself and his family, decided to start his own company, MR Industrial Services.

Matt is a family man and enjoys spending precious time away from work with his wife, Kirtsy and three young children, Connie 10, and twin boys/monkeys Alec and George 5, they are always at the forefront of everything he does and has achieved in business. He is into playing and watching numerous sports and due to a combination of his competitive edge, natural talent and ambition, he has done very well in participating; he represented the county in athletics and was ranked in the top 5 javelin throwers in all England schools. At basketball, he played for his county and progressed by playing for Leicester Riders and reached a pinnacle of representing his country – Scotland. Matt boxed at a very high level, even though he was a late starter, he was offered a full time contract after being dubbed as one of the best heavy weight prospects in the country. He has always been into his football and played in the United Counties League, he still plays five-a-side today (which is a struggle). Matt enjoys fishing, he used to spend a lot of time as a youth on the banks, nowadays he enjoys taking his two sons fishing and teaching them tricks of the trade and hopes that they will continue to fish as they grow up. He is also a keen golfer, currently playing to a high standard and is a member at Luffenham Heath golf club, which he has loved since joining. He loves playing ping pong and there is competition within the office, which also includes, darts, pool and snooker. Matt loves team events as love the comradery and social side of it. Matt also has a property portfolio/business with his wife, Kirsty (K&M Properties) which is also thriving.

“Obstacles don’t have to stop you. If you run into a wall, don’t turn around and give up. Figure out how to climb it, go through it, or work around it” (Michael Jordan)

Matt’s favourite food is, all food, but mainly Italian or a good steak.

Back to the team

Let us know how we can help

This website uses cookies to improve your experience while you navigate through the website. Out of these cookies, the cookies that are categorized as necessary are stored on your browser as they are essential for the working of basic functionalities of the website. We also use third-party cookies that help us analyze and understand how you use this website. These cookies will be stored in your browser only with your consent. You also have the option to opt-out of these cookies. But opting out of some of these cookies may have an effect on your browsing experience.
Necessary Always Enabled
Necessary cookies are absolutely essential for the website to function properly. This category only includes cookies that ensures basic functionalities and security features of the website. These cookies do not store any personal information.
Non-necessary
Any cookies that may not be particularly necessary for the website to function and is used specifically to collect user personal data via analytics, ads, other embedded contents are termed as non-necessary cookies. It is mandatory to procure user consent prior to running these cookies on your website.
SAVE & ACCEPT