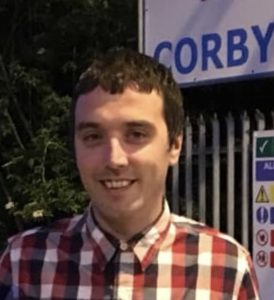 As health and safety manager, Lewis is responsible for ensuring that all members of staff are sufficiently trained and competent to carry out their task and to work alongside Project Managers to ensure health and safety standards are in place and being adhered to. As well as ensuring that the company are complying with regulations and legislation.

Lewis enjoys working with different people and ensuring that people’s health and safety are looked after during work and enjoy that every day is different.

Lewis served his apprenticeship as a car mechanic from the age of 16 and stayed on the tools for many years, working in local garages as well as main dealerships. He spent time working for a mining company called Rio Tinto in Dampier, Australia and also spent some time working in construction during his time in Australia. When he returned to the UK, he went back on the tools and became an MOT tester. Lewis then decided he wanted a career change, with the aim of getting into something where he could climb a ladder, he chose to follow in his Father’s footsteps and get into Health and Safety which he has always been passionate about, so self funded himself through the NEBOSH NGC and managed to get a job in the sector in the fragrance compounding industry. He worked his way up within this company and had the responsibility of managing the health and safety of the manufacturing site and looking after the health and safety of over 200 people on site. Lewis joined the MR Industrial Services team in May 2019.

Lewis’ family mean more to him than anything in the world so his favourite thing to do is to spend time with them. He also enjoys playing football and watching Manchester United and Scotland. Lewis is a keen golfer and loves getting out for a round. He loves music, either listening to it in the house or going to gigs.

Braveheart – Road to Perdition – Stand By Me –

“When the seagulls follow the trawler, it is because they think sardines will be thrown into the sea”. (Eric Cantona)

“Hope is a good thing, maybe the best of things, and no good thing ever dies” – (Shawshank)

“Success is not final, failure is not fatal, it is the courage to continue that counts”. (Sir Winston Churchill)

“Slide away and give it all you’ve got” (Oasis)

Back to the team

Let us know how we can help

This website uses cookies to improve your experience while you navigate through the website. Out of these cookies, the cookies that are categorized as necessary are stored on your browser as they are essential for the working of basic functionalities of the website. We also use third-party cookies that help us analyze and understand how you use this website. These cookies will be stored in your browser only with your consent. You also have the option to opt-out of these cookies. But opting out of some of these cookies may have an effect on your browsing experience.
Necessary Always Enabled
Necessary cookies are absolutely essential for the website to function properly. This category only includes cookies that ensures basic functionalities and security features of the website. These cookies do not store any personal information.
Non-necessary
Any cookies that may not be particularly necessary for the website to function and is used specifically to collect user personal data via analytics, ads, other embedded contents are termed as non-necessary cookies. It is mandatory to procure user consent prior to running these cookies on your website.
SAVE & ACCEPT